In a 2015 article for Victorian Literature and Culture, Jesse Oak Taylor famously asked, “Where Is Victorian Ecocriticism?”, pronouncing that “[t]he most striking thing about [...] the field of Victorian ecocriticism is that there is so little of it” (2015, 877). Since then, a slowly but steadily rising number of monographs, edited volumes, and special issues have attempted to not only answer that initial question but also to expand and subvert our understanding of nineteenth-century environments and ecological relations.
This recent turn to ecocritical approaches within Victorian Studies has foregrounded how the Victorian imagination was “engaged with concerns that continue to occupy contemporary ecological discussions,” and how “planetary change requires not only a scientific understanding but a cultural, perhaps even an aesthetic, explanation” (Parkins and Adkins 2018, 11). Scholars have explored how Victorian literature and culture reacted to ever-changing ideas about the relationship between the human and the non-human world, they have considered “the nineteenth-century planetary advancement of the Anthropogenic era” (Voskuil 2021, 28), and they have insisted on the global ecological effects of nineteenth-century imperialism (cf. Banerjee 2016, 2021; Chang 2016, 2019).
Our workshop, which will take place on December 09, 2022, aims to contribute to this newly emerging, vital field of Victorian ecocriticism by exploring the intersections of literature and culture with the environment in the nineteenth-century world, and by bringing socio-political and ethical concerns for the environment to the fore of Victorian studies in the DACH community. See our programme down below.


We look forward to meeting colleagues old and new in December - as always, feel free to pass our invitation on to any colleagues who might be interested in joining DACH Victorianists or redirect them to our website. Many thanks! 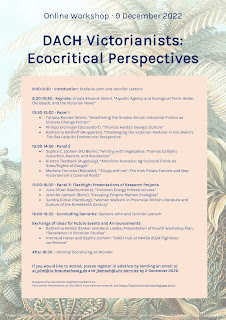